The right common carotid artery arises from a bifurcation of the brachiocephalic trunk (the right subclavian artery is the other branch). This bifurcation occurs roughly at the level of the right sternoclavicular joint.

The common carotid and internal carotid are slightly dilated here, this area is known as the carotid sinus, and is important in detecting and regulating blood pressure. 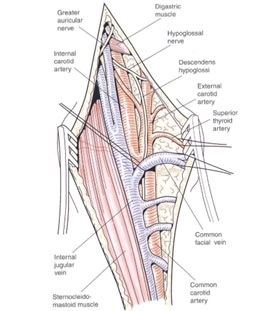 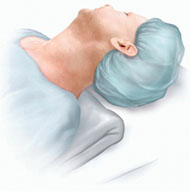 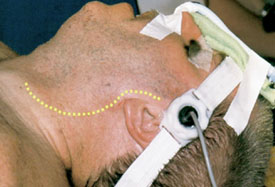 The exposure of a carotid artery is considered a high exposure, somewhere around the C2 level.  I would argue that it is very difficult, even with CT or MRIs, to corroborate exactly where the carotid bifurcation is.

If you have running plaque that goes up above C2, that would be something that you would need proximal and more cephalad exposure. Carotid body tumors, especially Shamblin 2 and 3, are the ones that may have some difficulty more cephalad, especially around the cranial nerves.

The carotid cut in half.

This allows you to pull this outside of the body as it is being dissected. 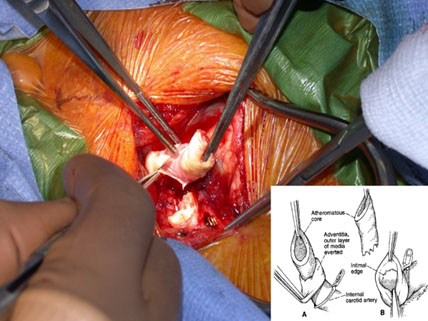 This also elongates the carotid so that you can access the distal point of the disease.

One of the reasons you need to get expansive exposure, especially on the proximal carotid, is that we are used to looking at things straight up and down.  With this technique, we look down the pipe a lot, so we are a little more comfortable being cornered in a bit, and this may be one of the reasons we haven’t had to do it.